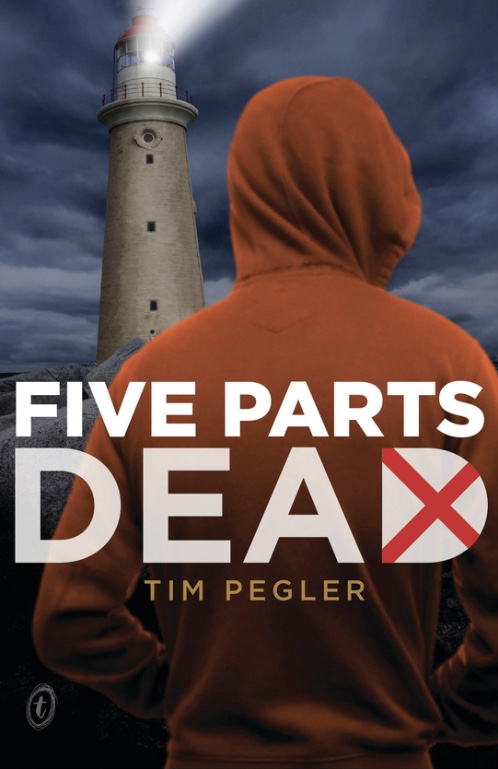 Five Parts Dead can be purchased online and as an e-book via Amazon and Apple iBooks.

You can download classroom discussion points via the Teaching Notes page.

Here’s an introduction to the story, courtesy of Text Publishing:

Five Parts Dead follows the story of Dan, a teenage boy convalescing on a holiday with his family. Dan is nursing the physical and emotional injuries sustained in a car crash that claimed three of his best friends. Left to his own devices he explores a nearby lighthouse and uncovers a tragic mystery.

This is an engaging, gripping story that perfectly conveys the hearts and hurts of teenagers. Tim explores the themes of peer pressure and guilt with an even hand and opens up the trauma in Dan’s mind for us all to see.

This is a brilliant novel for teenage boys and reluctant readers. A book that every 16 year old about to get their L-plates should read.”

And here’s some reviewer feedback:

“Five Parts Dead had it ALL for me. It made me snort coffee out of my nose as I laughed unexpectedly, it made me cry so hard I had to put the book down and walk away; it genuinely gave me the creeps in some places. It made me ache with compassion for its main characters, Dan and Lily, it had me fascinated and sickened at times. But most of all, it had me dreading the last page almost as much as I anticipated the ending. I never wanted this story to be over. Tim has woven two lives, two equally compelling tales, spanning two completely differing eras. And he has done a MAGNIFICENT job of it.” – The Book Gryffin

“It’s a perfect novel for all ages, that will capture the imagination of all readers – but it’s especially brilliant for boys and reluctant readers. This is a book that will not only mesmerise readers, but one that will linger. And did I mention it’s funny?” – inkcrush

“Pegler really knows his stuff as this is very well written with a gutsy and at time heartbreaking voice as well as an incredibly compelling plot. Highly recommended for any young adults but particularly for reluctant male readers…” – Magpies

“Pegler’s strong characterisation, his authentic dialogue and a touch of romance make this a great read.”- ReadPlus

“It’s not often that I read a book in one sitting, but I enjoyed Five Parts Dead so much, I felt compelled to get to the last page before lights out last night. It’s a great read – love the way you have entwined the two stories.” – JK

“Tim’s great at getting into the teen guy headspace and sharing a tale that really could happen to a lot of teens out there, underage drinking, driving under the influence, the consequences, etc. Well worth the read.” – Natalie Hatch of We Love YA

“nicely eerie and very enjoyable… i recommend it.” – Food For Silverfish

“…a breathtaking read that is sure to evoke a vast range of emotion and more than a few sleepless nights from even the most critical reader.” – The Book Gryffin again

“A gripping story … Best suited to boys 14+, but a good read for girls as well.” – Lamont Books

And via Twitter:
mike_sh
Tim Pegler’s Five Parts Dead has the most frightening and visceral car crash scene I have ever read. Also, the story is scary.

@Little_Bookroom
Loved #5partsdead, too much to get across on twitter, even! Very impressed, congratulations!